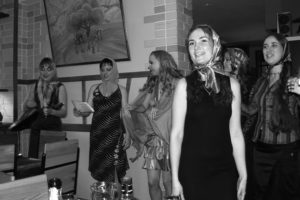 Saratov. The beginning of the story.

The paths of Olga Shkrygunova and Lisa Starostina crossed for the first time in the year 2003, when the story of Klavieriki started. Back then the two future partners studied at the Conservatory of the city of Saratov, which is located south of Moscow, on the Volga. During their education the two pianists participated in numerous musical competitions and concerts. In addition to many hours spent playing the piano both of them also discovered their special interest in stage performance and acting. Having benefited from interdisciplinary teaching at the Conservatory Olga and Lisa participated in various student productions, where they could show their acting talent and master their skills. Together Olga and Lisa have created an inspiring performance that combined piano playing and acting as part of their graduation project. However after they received their diplomas, Olga and Lisa chose different directions – at first. 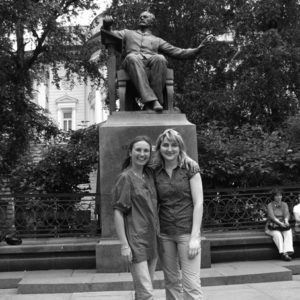 In front of the Moscow Conservatory.

Captured by the extraordinary appeal of the capital Olga went to Moscow after she had completed her studies in Saratov. Within her PhD program she studied chamber music at the Tchaikovsky Conservatory. Even in Moscow theatre would not let her go. She was cast in a production of the Russian Academic Youth Theatre ‘RAMT’ and collaborated with the well-known theatre director Mindaugas Karbauskis.

Lisa, for her part, moved further away. She was working as a pianist in the South Korean city of Busan for a year before going to Moscow. After that she was engaged in diverse creative work with children in a state music school in the Russian capital. At the same time she had also played at the Russian Academic Youth Theatre and committed herself to singing. The joint work never took place during Lisa’s and Olga’s Moscow period. This was soon about to change. 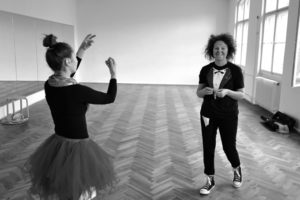 Finally together as the Klavieriki in Berlin.

The next change of scenery followed in April 2012. Olga first went to Rostock, where she obtained her master’s degree at the University of Music and Drama. From there she has moved to Berlin. Whether it was a coincidence, a predestined turn or whether all good things simply go by three, but the two friends have found each other once again in Berlin. They nearly became neighbours, when Lisa moved to the city in 2014. Somewhere in between Olga’s full concert calendar and Lisa’s motherhood an idea was born literally at the kitchen table. Though Lisa initially wanted to devote more time to her handcraft, Olga immediately slowed her down: ‘Darling, you can still do it later! First of all we now start as the two clowns, playing the piano.’ Lisa, who played the clown to her son everyday anyway, responded with a sparkle in her eye. The ‘Klavieriki’, a project truly dear to the heart, was born.